During the first lap, #2 Yuji Kunimoto (P.MU/CERUMO・INGING) and #37 Kazuki Nakajima (VANTELIN TEAM TOM’S) headed to the pit for the mandatory tire change. The focal point of the race then changed from which group of cars would pick up the pace; those that headed to the pit early, or the front runners who still hadn’t.

On lap 22, front-running Nojiri went into the pit and came out in a rather fast time of 7.8 seconds, but re-entered the track behind Kunimoto and Kazuki Nakajima. In the meantime, #1 Hiroaki Ishiura (P.MU/CERUMO・INGING) held out as long as possible for the mandatory pit stop.

During corner 2 of lap 31 #7 Narain Karthikeyan (SUNOCO TEAM LEMANS) spun out and the safety car was deployed. Ishiura saw that and headed to the pit. This strategy helped him to come back out onto the track in 4th place behind Kunimoto, Kazuki and Nojiri. The verdict is the teams that went to the pits on the first lap came out with the upper hand.

The safety car left the track on lap 35 and the race re-started. After that, Ishiura tried to overtake Nojiri, but Nojiri fought back. It looked like he would be able to stay in 3rd, but Nojiri was slapped with a drive through penalty while the yellow flag was out. Nojiri ended the race in 16th place.

Kunimoto, who raced well in both race 1 yesterday, and race 2 today came out on top for his first Super Formula victory. He was followed in 2nd by Kazuki Nakajima, who drove a marvelous race, and was able to jump up all the way from 10th place after getting knocked out of Q1. Ishiura finished in third. The winner of race 1 yesterday, #41 Stoffel Vandoorne (DOCOMO TEAM DANDELION RACING) finished race 2 in 7th place.

I Was Able to Win Because I Believed in Myself 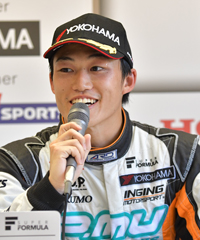 I am truly happy. Last year I wasn't able to post the results that I wanted to, and felt some anxiety because my teammate Hiroaki Ishiura had gotten off to a good start to this season. I have been doing okay since the beginning of this year, and my team has supported me when I was down. In addition, I have also received a lot of support from others, as well. So I am happy to have made the most out of this chance and picked up the win.
Kunimoto Was Fast, So This Was the Best I Could Do Today 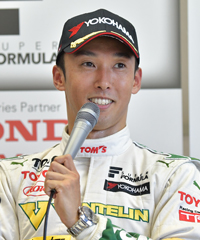 Today was a great race. But I still can't get over what I did in the race yesterday. But I have to live with what I did. The qualifying didn't go the way I wanted, so that is why I decided to head to the pit on the first lap of this race. I certainly didn't expect to have someone come out in front of me, but Kunimoto was fast, so this was the best I could do today. Ishiura was coming at me from the back, and he was fast. So I did everything I could to hold him off, thankfully I did. I got P.MU/CERUMO・INGING drivers from both ends today, so I am happy to have at least finished in 2nd place.
The Driver in Front of Me Controlled the Pace, So it Was Just Bad Luck 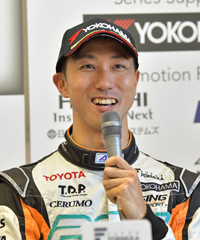 This morning, my car was runnning pretty fast. I actually took some hints from Kunimoto's set up, so I prepared as best as I could. The pace of the race was really fast, but unfortunately my plan didn't work out as anticipated. The safety car got deployed, and #40 Tomoki Nojiri (DOCOMO TEAM DANDELION RACING) got handed a penalty for not letting me out on the track first when I was coming out of the pit, but until he got that penalty, he really controlled the pace, so it was just bad luck. I wish there was something I could have done about it.